The Dodge Ram SRT-10 unleashed its Viper power today, taking its place in the Guinness Book of World Records as the “World’s Fastest Production Pickup Truck.” Only recently off the Saltillo, Mexico, assembly line and not modified in any way for additional power or enhanced aerodynamics, the Dodge Ram SRT-10 posted a two-lap, both-directions average speed of 154.587 mph over a “flying kilometer” on the 4.71-mile oval at the DaimlerChrysler Proving Grounds here in Chelsea. The record run by the Dodge Ram SRT-10 was certified by Guinness World Records and the Sports Car Club of America (SCCA). The previous record was 147.54 mph, set last July by the Ford SVT F-150 Lightning, before the Dodge Ram SRT-10 went
into production.

“When we set out to develop the Dodge Ram SRT-10, our mission was to create the ultimate performance truck,” said Dan Knott, Director, Street and Racing Technology. “With 500 horsepower, sports car-like handling, world-class braking and race-inspired design appointments, we know we reached our goal. Setting the Guinness record today simply confirms that, and solidifies the Ram SRT-10 as the ultimate — and fastest — performance pickup.”

According to Guinness World Records rules, the record speed had to be the average of two one-kilometer runs in opposite directions along the same track, made within an hour of one another. The timing equipment had to be certified as accurate to within 1/1000th of a second, and supplied and operated by a qualified third party. The speed of each run was timed by means of sensors at the start and finish of the measured kilometer, thus giving an average speed over the full distance.

The Dodge Ram SRT-10 is the third Dodge vehicle branded with the Street and Racing Technology label, following the Dodge Viper SRT-10 — the ultimate American sports car — and the award-winning 230 horsepower Dodge SRT-4, that has taken the sport compact “tuner” crowd by storm. 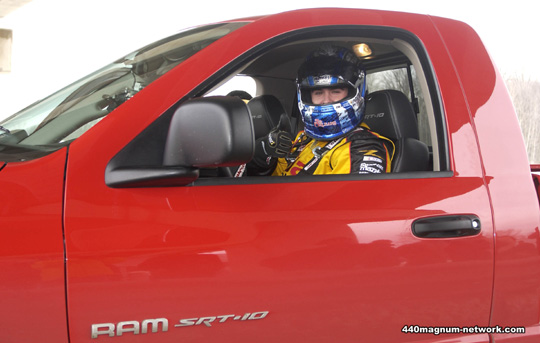 Behind the wheel of the Ram SRT-10 in the record-setting run was Brendan Gaughan, a six-time winner in a Dodge Ram in the 2003 NASCAR Craftsman Truck Series (NCTS). Gaughan makes his NASCAR Nextel Cup debut later this month at the Daytona 500 in the No. 77 Kodak Dodge.

Le Roux said watching the record-setting speed run was a great way to begin the new year, in which Guinness World Records celebrates 50 years of world records. “People aren’t too surprised when they hear about expensive super cars or race cars setting speed records,” he added. “But few people expect a standard production pickup truck, which they can drive straight off the dealer lot, to be capable of this sort of speed. That’s what makes this such a great Guinness World Record.” 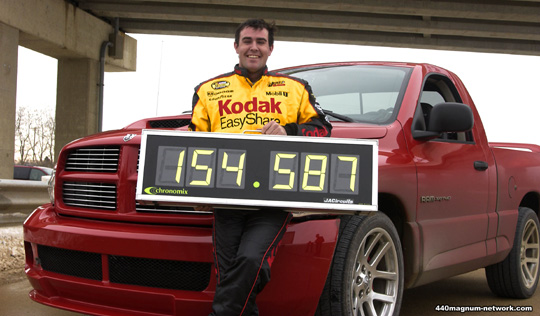 With a Guinness World Record now under its belt, the stock Dodge Ram SRT-10 now heads to Florida, where it will pace the field at the Feb. 13 Florida Dodge Dealers 250 NCTS race at Daytona International Speedway.