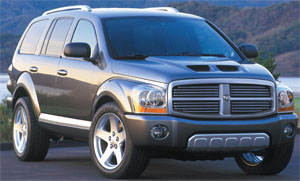 Bigger, bolder and faster, the 2003 Dodge Durango HEMI RT Concept separates itself from the sport utility pack with big power and a broad shouldered presence that could only come from Dodge. With more style, more cargo room and more capability, the Dodge Durango Concept delivers on all fronts, including the type of muscle that only a Dodge can deliver: HEMI power.

The Dodge Durango Concept features a bold and powerful presence that is three inches longer, more than three inches taller and four and a half inches wider than the current generation Durango. The enlarged exterior results in a roomier all-new interior that provides increased head, shoulder and hip room and available seating for seven. Interior capacity is increased by 15 percent and is enhanced by Durango’s fold-flat cargo floor. As shown in the concept, Durango now has the capability to carry 48-inch wide sheets of plywood between the wheel wells.

The Durango Concept features an all-new independent front suspension with a rack-and-pinion steering system for an even more precise feel. An all-new rear suspension with coil springs and a solid rear axle delivers a smooth ride, yet maintains durability, payload and towing capability. A Watt link system is fitted to the rear axle, centering the axle and reducing rear-end skate over rough surfaces. 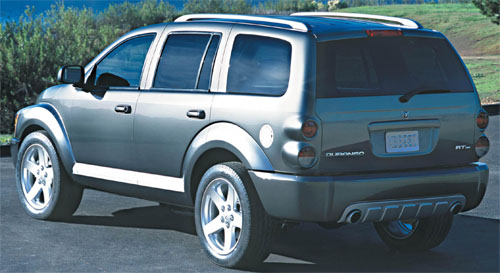 Own a Dodge Durango R/T? Get it featured on our network. Click here to submit your Mopar!