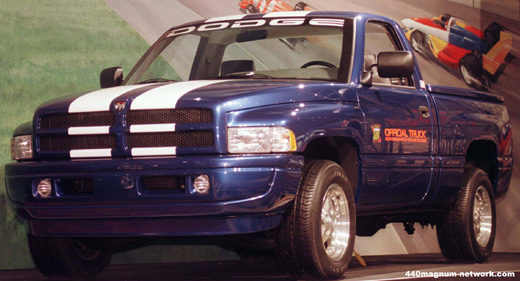 Above: Chrysler Corporation’s Dodge Division introduced the Dodge Indy 500 Special Edition at the North American International Auto Show. Its brother the Dodge Viper was the Pace Car in this 1996 classic Indy 500 race.

Robert A. Lutz, who was Chrysler Corporation President on May 26, 1996, with a Dodge Viper GTS that he drove to set the pace for the start of the 80th running of the Indianapolis 500 in Indianapolis, Indiana. (Retired – 7/1/98)

Production numbers for the 1996 Dodge Ram Indy 500 Special Edition truck varies according to source. These numbers should only be used as a guideline. Most sources agree that Dodge built between 2802 and 3,212 of these cool trucks.

Featured on the Mopars Of The Month site: