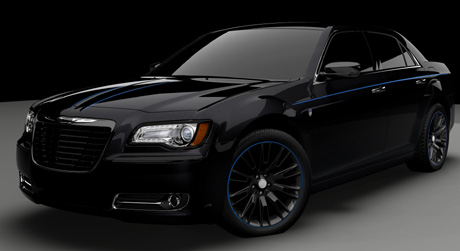 Building on the success of Mopar versions of the 2010 Dodge Challenger and 2011 Dodge Charger, the new Mopar ’12 300 transforms the Chrysler 300 flagship sedan into a performance tribute to celebrate Mopar’s 75th anniversary with unique appointments, select high-performance parts and appearance items straight from the Mopar parts catalog.

Power and performance – Mopar earned its factory-designed performance reputation with enthusiasts and the most discerning racing drivers for the past 75 years – and the new Mopar ’12 is designed to showcase the brand’s prowess.

When looking under the hood of the Mopar ’12 300, an exclusive Mopar engine cover hints at the 363 horsepower 5.7-liter HEMI V-8 engine with innovative four-cylinder mode Fuel Saver Technology beneath. Backed with a proven five-speed W5A580 automatic transmission, Mopar aficionados will appreciate the unique Mopar shifter combined with Auto Stick. With Auto Stick, drivers may select a higher or lower gear while the transmission controller helps prevent the possibility of an over-rev condition.

Highlighting the Gloss Black exterior contours of the Mopar ’12 300 are a Mopar Blue A-line body-side stripes. Large 20-inch by 8-inch Mopar forged-aluminum wheels are painted in Gloss Black and include Mopar center caps. Commemorating the brand’s 75th year, “Mopar 75” fender badges feature the Mopar Blue “omega” logo. On the deck lid, a “Mopar Design” badge hints at the select Mopar parts and accessories that have been infused to enhance performance and distinguish the Mopar ’12 300 from any other Chrysler 300.