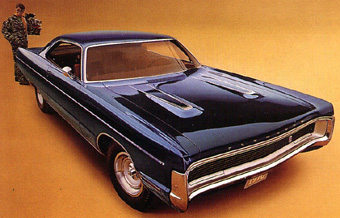 Part of Plymouth’s Rapid Transit System for 1970, the Sport Fury GT was designed to combined luxury and performance in a big car. Based on the 2 door Fury hardtop, the standard engine was the Super Commando 440-4V rated at 350 hp with only one optional engine the 440 6-barrel engine rated at 390 hp.

On the inside the Sport Fury GT was offered with a cloth-and-vinyl or all vinyl bench seat with fold down center armrest. Optional all-vinyl buckets could be added for that added performance touch. If buckets were your style, a console was also available. The Instrument panel was floodlit and easy to read and reach.

On the outside the Fury GT featured hidden headlamps, two power bulges on the hood. Dual hood runner stripes in either white, black or burnt orange. And reflective “Strobe Stripes” on the side and rear deck lid. Steel Road Wheels and chrome-plated dual exhaust tips were standard. Only 666 Sport Fury GT’s were produced in 1970 with 61 powered by 440 6-barrel engine. 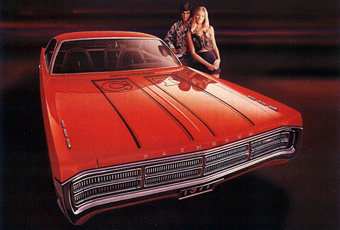 1971 Plymouth Sport Fury GT – The Plymouth Fury GT was again offered for 1971. The 440 6-barrel engine was no longer an option. The Super Commando 440-4V engine was the only engine offered but hp was now rated 375.

The GT featured a new grill and tail-lights and a few interior changes, however most features remained un-changed from the previous year. Only 375 Plymouth Fury GT’s were produced in 1971.